Beware the Halo.”Our Organisation is so special we can get away with anything”

Beware the Halo.”Our Organisation is so special we can get away with anything”

I recently returned from speaking in Cape Town, South Africa, at the invitation of the CFA SA. Even though South Africa is where I blew the whistle, it’s taken eighteen years to be invited back to share the lessons learnt from the LeisureNet disaster, aka “South Africa’s Enron”. In comparison to how institutions worldwide are engaging in these significant lessons, South Africa is being left lagging behind, leaving them vulnerable. Institutional investors lost their entire investment in LeisureNet when it went down and yet none of them supported my disclosures to see the joint CEOs jailed. They remained and still remain unwilling or/unable to engage. Is hubris and pride driving this reluctance or shame at how easy it was to pull the wool over their eyes?

In this blog, I want to share how LeisureNets’ halo blinded investors to the realities on the ground.  It’s a cautionary tale. Oh, and before you rationalise that this is not an example of how the organisation you work for operates please check your organisational halo at the door.

Below is a copy of page 1981 of my witness bundle when testifying as the whistleblower for South Africa’s biggest corporate disaster. (Mr Woodland is the Prosecuting Advocate) 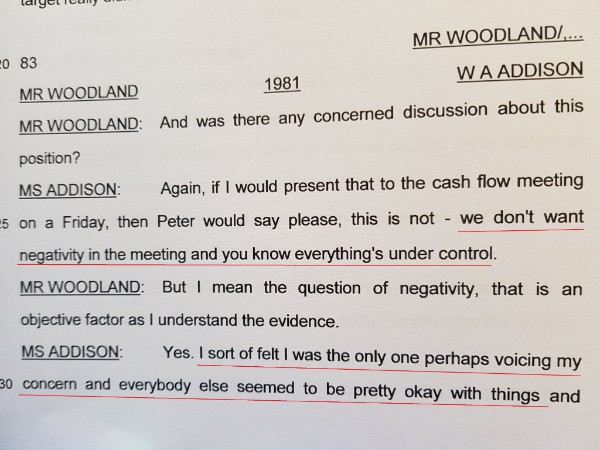 In this part of my testimony, reflected above, I was sharing how negative. albeit objective, input was not allowed. Note my frustration at appearing to be the only voice of concern and my comment, ‘everybody else seemed pretty okay with things’.  Perhaps my colleagues weren’t okay with things, or perhaps the halo, now contaminated and slipping, was still bright enough to blind them to the facts.

While the norm of the brilliance and success of LeisureNet had been broadly internalised both within the organisation and externally in society, it had not become an internalised narrative for me. I continued to attempt to voice my concerns until being forced to report externally.

We had a ’politics first’ mentality that prized appearance management above action. This resulted in a climate where no one wanted to appear to be negative, and certainly not be the bearer of bad news. Colleagues were seen as competitors, all angling for the closest position to someone in power.

Much of our thinking about company performance is shaped by the halo effect, when a company is growing and profitable, we tend to infer that it has a brilliant strategy, a visionary CEO, motivated people, and a vibrant culture. When performance falters, we’re quick to say the strategy was misguided, the CEO became arrogant, the people were complacent, and the culture dodgy.  At first, all of this may seem like harmless hyperbole, but when bankers and investment advisers gather data contaminated by the halo effect – including not only press accounts but interviews with managers – the findings need to be challenged. Outsiders who invested in LeisureNet Ltd fell prey to the halo effect, overvaluing certain attributes while undervaluing others, basing their knowledge on lopsided or distorted information.
See a comments below from two separate financial advisors rating LeisureNet Ltd for investment.

The halo effect is the general human tendency to let an overall impression shape specific judgment.  In the example of LeisureNet, observers attributed its strong performance to strong leadership, among other factors. In actuality, it was the reverse—the company’s performance enhanced the general perception of LeisureNet’s leadership.
See below the editor of the Financial Mail giving a thumbs up to ‘management’s expertise’ at LeisureNet.

We assume that there’s a causality in one direction when in fact it may be in the other. We don’t force ourselves to use concepts in a rigorous and valid fashion, tending to give those with the Halo a pass when we shouldn’t.

I observed many senior individuals from the financial sector attending meetings with various LeisureNet directors. When talk came to the financials, marketing materials, in the shape of large, glossy show pieces would be thrust in front of the banker. Page after page was turned, accompanied by excitable narrative, with no pauses for reflection or questions.  On one memorable occasion, LeisureNet was able to secure a loan from ABN AMRO for £45 000 000.00 without providing any financial information to them.  See below the Commissioner for the inquiry remarking on this during my testimony.

The stories LeisureNet told itself were deceptive organisational messages that were embedded in our culture and repeated constantly throughout the enterprise. During the high-flying years, the messages had been exuberant and confident: We’re extraordinary. The rules don’t apply to us. We’re the Darling of the JSE. Always succeed, never fail – a  constant flow of inaccurate but persuasive messages that took the enterprise in illusionary, deceitful directions.

It was as if people throughout the company were deceiving themselves and their colleagues about the business and its potential. When business leaders complain about their culture, they’re usually complaining about these corporate cognitive distortions.

These deceptive organisational messages went unexamined, taken for granted, and were strengthened through everyday conversation. Just as demonstrated in the first part of my blog, when I was told not to be negative, an implicit consensus often follows: Negative news is unwelcome. People treat this message as an unquestionable axiom, assume that others believe it, repeat it up and down the enterprise, and avoid any action that would contradict it. Indeed, when I attempted to speak up internally, the general pattern of deceptive messages drove managers to attempt to cover up the malfeasance: That’s not the kind of company we are. Or, There must be something wrong with the Wendy.

Overconfident exceptionalism of this sort, in which executives underestimate the riskiness of their activity, has led many companies into complacency, and then to failure.  If the exceptionalism extends to the entire company, then managers get into the habit of overstepping boundaries or fudging numbers, growing bolder and bolder until the risks catch up with them.

At LeisureNet, misperceptions were manifested as perfectionism, or all-or-nothing thinking: It should be completely flawless, or it won’t have any value. As a result the churn of new recruits was significant.
See an example of attitudes and associated narratives from the CEOs at an international meeting of senior leaders, which I attended.

The style of LeisureNet’s management was to rule over people rather than to lead through people. Employees did not express disagreements with their managers because the power distance captured managements’ belief in hierarchy and their expected conforming role of subordinates.

Research confirms that this attitude is directly related to managements’ view of, and reaction to employee voice – speaking up the chain of command about unethical practices. And for those who believe ‘voice’, ‘speaking up’, ‘listening up’, ‘courageous conversations’ is about ‘open banter’, you’d be incorrect.  ‘Open Banter’ requires no or very little courage.

Considerations
Organisations are fundamentally linguistic entities.  A company is the sum of all corporate dialogues, what we call a “network of conversations.”  Communication is therefore the conduit for action and non action.

The ability to engage in Courageous Conversations helps you and others in your organisation to detach from the automatic churn of messages supporting expedience and short-term solutions, and via the hand rails provided to empower how to speak and listen up, move closer to more executive function, broader aspirations, and greater long-term awareness.

Since 95 percent of the people are imitators and only 5 percent initiators, people are persuaded more by the actions of others than by any proof on offer. Be the One to Speak Up first or be the Allie who joins them.

Learn to resist the reflex to rationalise what you are being asked to do in order to resolve your discomfort; the discomfort is your ally in doing the right thing.

Learn to not be assuaged by responses that are not answers, by attempts to rationalise the order, to shame you as being the only one questioning the order, or by promises of future correction of violations that are being ordered now.

Learn to ask questions in a structured way. A powerful question has the capacity to “travel well”—to spread beyond the place where it began into larger networks of conversation throughout an organisation. Questions that travel well are often the key to large-scale change.

How Swiftly Should a Hedge Fund Respond to a Whistle-Blower?

Thanks for reading my blog.  If you enjoyed it, please share it.

I’d love to be of help; get in touch.