Will you Sacrifice your Principles for the Pied Piper of Unethical Acts?

Will you Sacrifice your Principles for the Pied Piper of Unethical Acts?

There is no wonder my whistleblowing case is known as “South Africa’s Enron“. There are significant and identifiable parallels.

In this blog I want to focus on the the attempt by the joint CEOs of the organisation I blew the whistle on, to persuade the Chairman of the Audit committee, a Board Director, to have Deloitte, our external auditors at the time, to take an additional seat at the Board, that of heading up the Internal Audit department. There appears to have been no acknowledgement by the CEOs for the potential of conflicts of interest or rhetoric about ‘segregation of duties’.

Here is a copy from the Cape High Court trial transcript where the Chairman of the Audit Committee shared how Deloitte had attempted to persuade him, citing that Enron had Arthur Anderson as internal and external auditors. The timing of that discussion would have been early in the year 2000. We all know how that worked out for Enron and for Arthur Anderson! 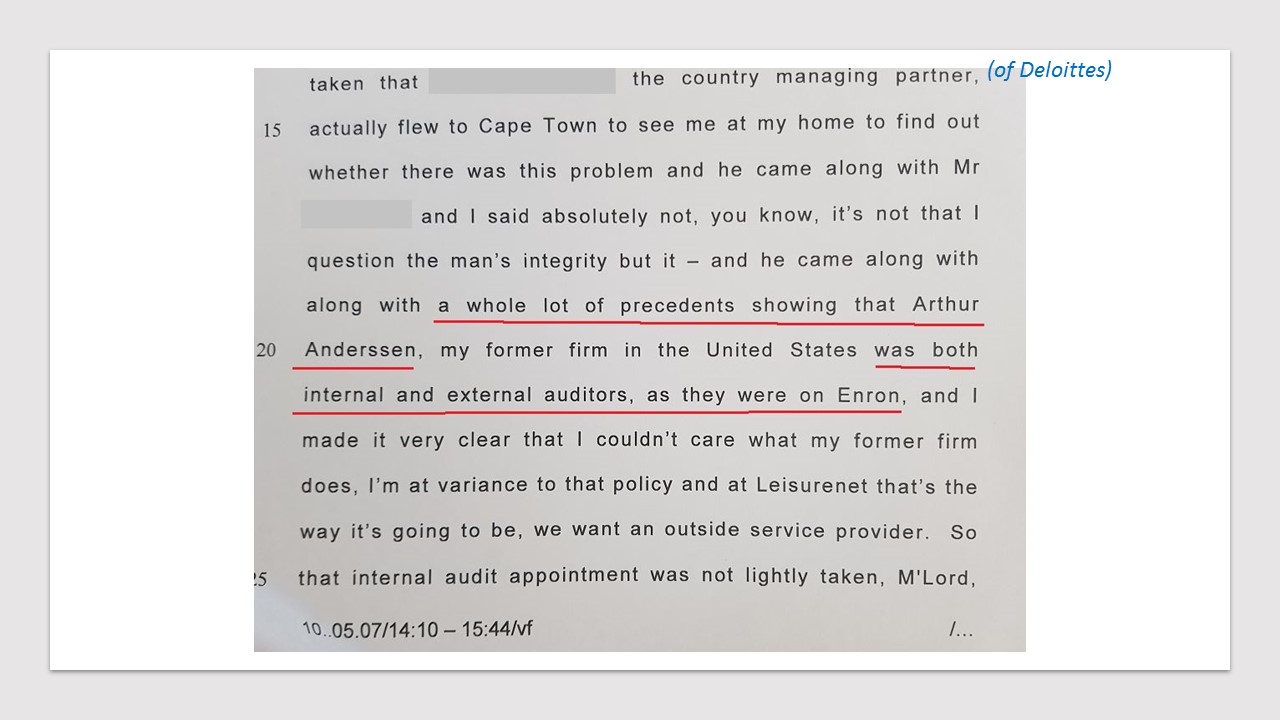 When this approach was unsuccessful, the CEOs turned their attention to the Senior Partner of Deloitte, an individual who had been involved in our audit since LeisureNet’s inception in the 1980’s. They convinced him to resign his partnership at Deloitte’ and join the LeisureNet board of directors. This individual was a respected, much liked person with apparent integrity and moral standing.

Why did he choose to follow the unethical CEOs in the full knowledge of their maverick attitudes and disregard to corporate governance?

His move to the LeisureNet board ultimately allowed, possibly sanctioned, the removal of  ZAR 900Million worth of leasehold liabilities from the LeisureNet Ltd 1999 balance sheet and reported financials. This collusion, setting the stage for fraud, illustrates the danger of the combination of narcissistic leaders and compliant followers.

Understanding the causes of organisational fraud requires consideration of the leaders, followers and the contextual factors that can create a toxic triangle making fraud more likely. Followers bear a responsibility for responding to a leader’s negative force especially if they are willing accomplices facilitating an unethical leader’s plans in order to bring themselves satisfaction from being recognised and accepted.

Is there a behavioural red flag that helps with identifying such a follower? Recent research indicates that there are personality traits associated with behavioural intentions to comply with the demands of an unethical CEO. One of these traits is ‘self-sacrificing-self-enhancement (SSSE)’, a form of maladaptive narcissism characterised by seemingly altruistic behaviours that are actually intended to boost self-esteem.

The LeisureNet organisational climate was pervasively egoistic, fostering self-interest, self centeredness and narcissism, shaped by the joint CEOs who were the founding members. Since Deloitte, and particularly the Senior Auditing partner, had been in a co creational ‘partnership’ for a significant number of years, perhaps there had been an acceptance and internalisation of the unethical CEOs’ dark vision in the influence process. The research suggests that a follower who internalises a dominant leader’s vision may be particularly susceptible to unethical leader directives because of the leader’s grandiose persona and due to these directives being framed in terms of being in the organisation’s best interests.

In sacrificing his moral identity, perhaps the senior auditing partner derived narcissistic pleasure from others recognition of his actions along with an increased sense of self-worth and belonging.  This “masochistic altruism” is self-serving, rather than other-serving.  Self Sacrificing-Self enhancement (SSSE) may also have provided him with a built-in rationalisation and willingness for unethical acts on the CEO’s behalf in addition to obligating others and enhancing his self-presentation.

Utilising my case demonstrates the importance to those responsible for corporate governance of understanding follower as well as leader motivations to commit unethical or fraudulent acts, how follower tendencies might influence follower compliance, and how better to intervene to counteract or monitor the dynamics of potentially harmful leader-follower relationships.

So what’s the antidote for Self Sacrificing-Self Enhancement behaviour? Courageous resistance, which is necessary for followers to resist destructive leadership. Building courageous resistance includes developing a long-term focus enabling people to anticipate problems and consequences and act proactively to deal with them immediately. Courage enables individuals to seek satisfactory explanations via Courageous Conversations rather than simply following orders. It is through courage that we can develop the highest level of intended resistance to leader pressure for unethical compliance.