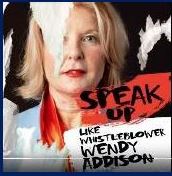 This month, I’ve been humbled by being acknowledged by the Think: Act magazine as a Business Disruptor, Rebel WITH a cause and a Constructive non Conformist. What an honour and a privilege to be recognised this way, not only for myself, but for all whistleblowers.

For as long as the act of Whistleblowing is perceived as a form of non compliance to social norms, whistleblowers are indeed constructive Rebels with a cause;  to halt the conflagration of misconduct harming society.

Personally, in that moment of breaking the rules by speaking up and then out, I simply didn’t know if the outcomes would break the system or break my life. I fought for justice, which took eleven long years, and I fought to find my courage and resilience in order to survive a protracted time begging on the streets with my twelve year old son.

I believe it was my insatiable curiosity that kept me alive. There were many times I faltered and fell into a suicidal darkness. I understood that if I were to end my life I would never know what tomorrow might have brought me and I appreciated that I needed to know about all of the tomorrows.

After securing justice it took me a further eight years to reinvent and rebuild my life and it was curiosity, a growth mindset and courage that allowed me to pivot back into business. This kind of transition cannot be improvised, requiring an energetic willingness to learn, passion, risk taking and resilience.

See a cutting from an interview with me in 2007 below. 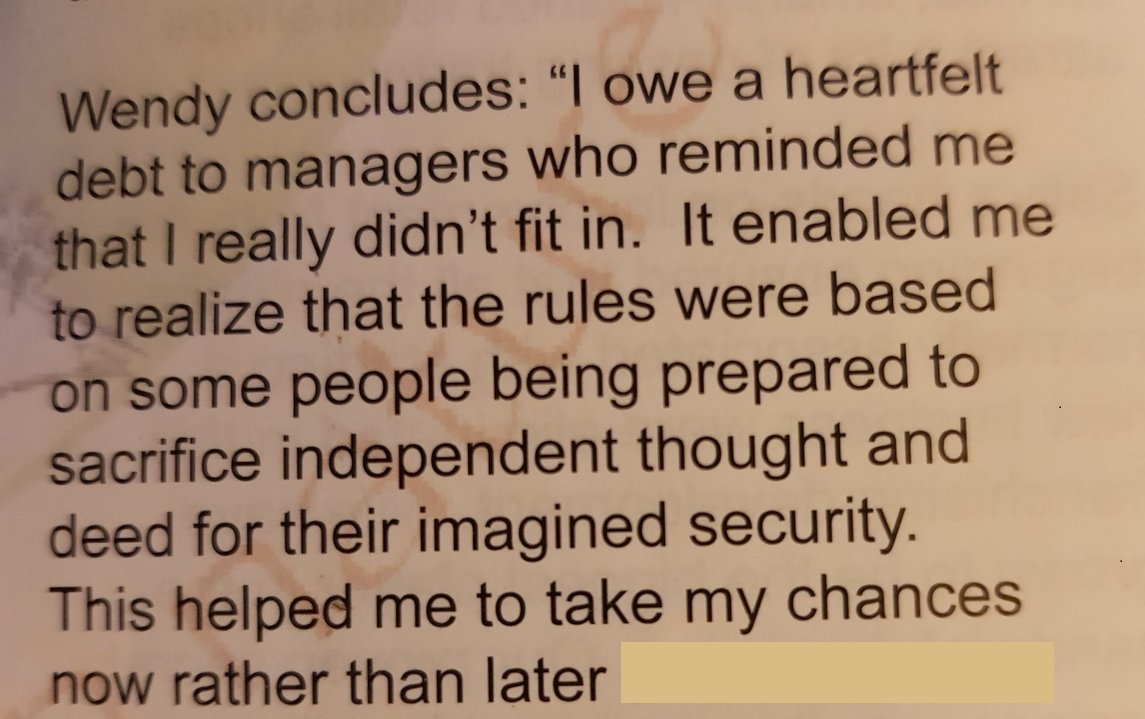 Starting when we’re very little, we all experience pressure to conform to the status quo. As we climb the ladder, we end up in positions where not only do we succumb to that pressure, but we pressure others to do the same.  People in their organisations do not question the status quo and organisations consciously or unconsciously urge employees to check a chunk of their real selves at the door. The price paid is decreased engagement, productivity, and innovation. 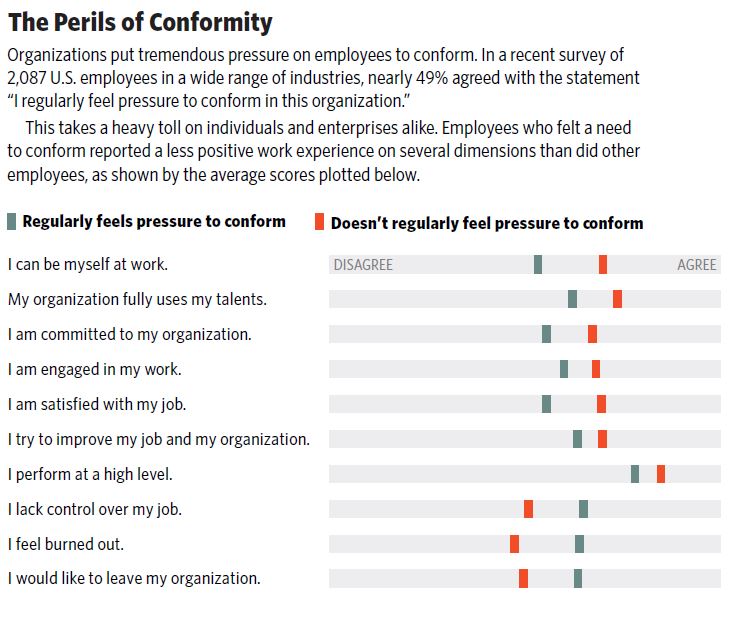 Source: Francesco Gino
According to research conducted by Francesco Gino, Tandon Family Professor of Business Administration, Harvard Business School, effective rebels are willing to break rules that hold them and others back. They look beyond the most obvious answer to find a better one. And in a world that’s ever-changing, rebels succeed because they don’t fear uncertainty: they are masters of innovation and reinvention.

Not all conformity is unhelpful.  Even the most charismatic conquerors wouldn’t have been successful in the long run without keeping some of the old rules – or building new ones. Alexander the Great secured his impact by “remixing,” literally marrying Greek and Persian culture in 324 BC. The offspring, Hellenism, ruled the Occident for half a millennium and is still one of the strongest legacies of Western culture. Google’s “don’t be evil” mantra served as a useful guideline for a company.

Sailing towards uncharted territories to innovate and evolve, both organisations and individuals need to strike a balance between adherence to the formal and informal rules that provide necessary structure and the freedom that helps employees perform to their best ability. Leaders have been overly focused on designing efficient processes and getting employees to follow them. Now they need to think about when conformity hurts their business and allow — even promote — what Francesca calls constructive nonconformity: behaviour that deviates from organisational norms, others’ actions, or common expectations, to the benefit of the organisation. This fits in nicely with the research on Moral Courage, which is manifested in the workplace when an employee takes a risk or goes the extra mile — not necessarily because it benefits them personally, but because it’s best for the organisation

Conformity at work takes many forms: modelling the behaviour of others in similar roles, expressing ‘appropriate’ emotions, wearing proper attire, routinely agreeing with the opinions of managers, acquiescing to a team’s poor decisions etc. However, all too often, bowing to peer pressure reduces individuals’ engagement with their jobs. This is understandable as conforming often conflicts with our true preferences and beliefs and therefore makes us feel inauthentic.

Reasons for Conforming
Our Need for Belonging
Our brains start screaming, metaphorically, when we disagree with group norms. It feels better to go along with the group than it does to express our contradictory views.  Going along with the crowd may be mentally reassuring, but it can be even more fulfilling to follow our own unique desires and modes of expression

The Status Quo Bias  – “The way it’s always been done”
We feel validated and reassured when we stick to our usual ways of thinking and doing, and because, as research has consistently found, we weight the potential losses of deviating from the status quo much more heavily than we do the potential gains, we favour decisions that maintain the current state of affairs.

But sticking with the status quo can lead to boredom, which in turn can fuel complacency and stagnation. Borders, BlackBerry, Polaroid, and Myspace are but a few of the many companies that once had winning formulas but didn’t update their strategies until it was too late. Overly comfortable with the status quo, their leaders fell back on tradition and avoided the type of nonconformist behavior that could have spurred continued success.

The Echo Chamber
We tend to prioritise information that supports our existing beliefs and to ignore information that challenges them, so we overlook things that could spur positive change. Complicating matters, we also tend to view unexpected or unpleasant information as a threat and to shun it — a phenomenon psychologists call motivated skepticism. In fact research suggests the manner in which we weigh evidence resembles the manner in which we weigh ourselves on a bathroom scale. If the scale delivers bad news, we hop off and get back on — perhaps the scale misfired or we misread the display. If it delivers good news, we assume it’s correct and cheerfully head for the shower.

Considerations
Give employees opportunities to be themselves from the very start of the employment relationship.

Create challenging experiences: Research led by David H. Zald, of Vanderbilt University, shows that novel behavior, such as trying something new or risky, triggers the release of dopamine, a chemical that helps keep us motivated and eager to innovate.  By shaking up our setting, our minds retrieve information stored in different parts of the brain, which increases the chances of memory retention, and often, new and original thinking. Additional research conducted by Silvia Bellezza, of Columbia and Anat Keinan, of Harvard, showed that people observing those taking action outside the norm, such as a speaker who wears red trainers, a CEO who makes the rounds of Wall Street in a hoodie and jeans, and a presenter who creates her own PowerPoint template rather than using her company’s as having higher status than counterparts who conform to business norms.

In the same vein, research by Mona Weiss  and Elizabeth W. Morrison indicates that  voice and speaking up, although challenging, is likely to have a positive effect on an employee’s social status through the respect, prestige, and admiration one obtains in the eyes of others. Compared with employees who remain silent, those who speak up are seen as more capable and independent, and also as more helpful and trustworthy, which in turn causes them to be ascribed higher status by an observer.

Foster Broader Perspectives : we often focus so narrowly on our own point of view that we have trouble understanding others’ experiences and perspectives. And as we assume high-level positions, research shows, our egocentric focus becomes stronger.

Identify courageous dissenters: whether it’s in conversations or in meetings, we often seek out the opinions of people who have something similar to offer. What rebels do is fight that instinct. They find ways to steer some conflict or encourage disagreement.

Foster Curiosity, the most important trait for Rebel Talent as this leads to a growth mindset: the longer we’re in a job, the less curiosity we have. After six months there’s a 20% drop in curiosity. The correlation of this information is that whistleblowers blow the whistle earlier on in their careers, when they have less ‘skin in the game’, to those who have a longer tenure and feel they have more to lose and a sense of obligation to those who escalated their careers.

Although leaders might say they treasure inquisitive minds, in fact most stifle curiosity, fearing it will increase risk and inefficiency. Francesco Gino asked some 230 high-level leaders in executive education classes what they would do if confronted with an organisational crisis stemming from both financial and cultural issues and most said they would take action: move to stop the financial bleeding and introduce initiatives to refresh the culture. Only a few said they would ask questions rather than simply impose their ideas on others. Management books commonly encourage leaders assuming new positions to communicate their vision from the start rather than ask employees how they can be most helpful. It’s bad advice.

Curiosity also helps in managing potential ethical crises. In the face of a serious accusation of organisational wrongdoing (e.g. corruption or illicit business practice), the first principle – duality of mind – compels curiosity. Rather than immediately dismissing an accusation as inconsistent with what we know of the organisation, we need to seek out all available information. The ability to remain curious could fundamentally change the way whistleblowers are currently responded to.

Organisations, like individuals, can easily become complacent, especially when business is going well. Complacency often sets in because of too much conformity — stemming from peer pressure, acceptance of the status quo, and the interpretation of information in self-serving ways. The result is a workforce of people who feel they can’t be themselves on the job, are bored, and don’t consider others’ points of view.

Constructive nonconformity can help companies avoid these problems. If leaders were to put just half the time they spend ensuring conformity into designing and installing mechanisms to encourage constructive deviance, employee engagement, productivity, and innovation would soar.

Who are the employees spinning their wheels in the garage? Open the garage doors, these people will take you somewhere.

Do you want to find out more? Please get in touch, I’d love to be of service.