Fairness Versus Loyalty: The Whistleblower Trade-Off

Fairness Versus Loyalty: The Whistleblower Trade-Off

Life is filled with diverging paths, and which path one takes in life often defines one’s purpose.

Many times, the paths are clearly illuminated so that it is obvious which is the right one and which is the wrong one. Should I help an old man who slipped on the pavement or just look the other way? Should I return a favour to a friend or try to avoid her? In such cases, achieving one’s purpose is merely a matter of deciding if one wants to do the right thing and motivating oneself to trudge through the muck and mire toward one’s goal. Other times, the paths are not so clearly lit. Sometimes doing what is right for some means doing wrong to others.

Let’s explore the weight you place on some values.

How did you score?

Watch 3 min video of my question to Dan Ariely, Professor of Psychology and Behavioral Economics at Duke University plus Dan’s response. ‘How do you create Loyalty and give consideration to a higher order?’

I believe it superficial to talk about whistleblowing only in terms of legislative policy and process. We need to understand the psychological determinants of whistleblowing to shed light on factors that encourage or discourage this practice.

There have been many articles written about teamwork, group cohesion and the salience of liking our colleagues. This is all good. It also makes it extremely difficult to speak up or whistleblow on any unethical practices of our colleagues.  I know this from my own experience. In my Whistleblowing case, the joint CEOs who were embezzling millions into a secret Jersey Bank account were also friends of mine. I liked them. I socialised with them. They treated me like a family member. Bringing attention to their illegal activities made me physically ill.

How did I get beyond this?  I recall considering how many international victims of corruption there might be once the company had listed on the LSE as opposed to being listed only on the JSE. In hindsight, I understand that I broadened my viewpoint, lengthened the time frame. Sure, I was loyal to the CEOs and to my colleagues but I didn’t believe it fair for stakeholders, current or in the future, to have their investment and trust eroded by corruption.

To some, I am a hero whistleblower who informed the world about violations of corporate governance; to others, I am a traitor who betrayed the company I worked for. Such judgements are complicated. Should I have forsaken fairness over loyalty?

All our lives often involve tension between conflicting values. Should you spend time on your work or with your family? Should you enjoy your present or save for the future? Getting stuck between a rock and a hard place is uncomfortable, with deciding how to act being the only way for release.

I agree with research by Adam Waytz and colleagues that fairness and loyalty constitute core moral values considered for whistleblowing decisions. Whilst both values influence moral behaviour, the consideration for whistleblowing creates a competition between fairness and loyalty resulting in a trade off. The outcome will vary depending on what weight a person places on the two different values.

At their core, norms for fairness and justice demand that all persons and groups be treated equally. By contrast, loyalty norms dictate preferential treatment, a responsibility to favour one’s own group over other groups. Studies have shown that fairness norms typically dominate behaviour but may be overridden in contexts that pit fairness against loyalty.

When the research group of people were asked to think about an occasion when they witnessed unethical behaviour–and either reported, or did not report it—the researchers found that those who reported it, the whistleblowers, used ten times as many terms relating to fairness and justice (for example, “Someone was denied his or her right.”) whereas the non-blowers used twice as many terms related to loyalty (for example, “Someone betrayed his or her group”). The researchers claim that, although fairness and loyalty are both basic moral values, some of us focus more on the former and others more on the latter. This is particularly true when research participants were faced with making trade-offs between the two values.

In sum, people who valued fairness more expressed greater willingness to blow the whistle when faced with ethical misbehaviour than those who placed a higher value on loyalty. 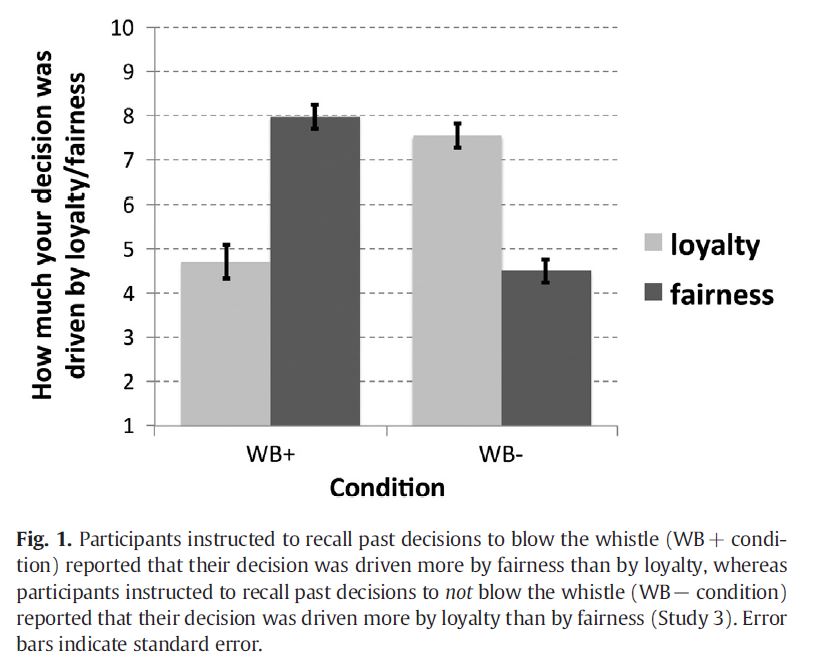 Additional studies within this research, indicated the importance of the relationship between the offender and the whistleblower with the willingness to blow the whistle decreasing as the relationship closeness increased. This result shows extra challenges in blowing the whistle within family-run businesses as well as strong cohesiveness in group settings and individual friendships.

Promoting Fairness ahead of Loyalty
One suggestion is to engage brute-force deliberate reasoning to override prepotent partiality based responses of ingroup favouritism and bias. Another method may be to reframe whistleblowing as demonstrating a “larger loyalty”, to a more universal social circle and to the greater good.

I would add that to make fairness a salient value, emphasise fairness in mission statements, codes of ethics, honour codes and ad campaigns.

Reconciling the conflict between fairness and loyalty in these terms may improve perceptions of whistleblowing and ultimately encourage ethical behaviour across cultures.

Did you enjoy this blog?  If so, please share.

Please get in touch, I’d love to be of service.