Diversity: Are You A Robin Or A Penguin?

Diversity: Are You A Robin Or A Penguin?

Just imagine: Your boss asks you to run a series of special training days for other employees. At first you feel rather flattered that your boss is considering you for this task. But you soon realise that there are costs involved: for one, you are expected to prepare for the training in your own time, for no extra payment.

What would you do?

One of the factors in your decision in this example, and many others like it, will be to what degree you’re prototypical.

People who are prototypical of their group, best represent what the group stands for as a whole. People who are less prototypical are more peripheral to the group because they represent the group less well. To give an example from the animal world, a Robin would be seen as a prototypical bird as it matches the defining features of what a bird is (e.g. sings, is able to fly, lays eggs). In contrast, a Penguin is a more peripheral example of the bird category as it matches some defining features (e.g. has wings and lays eggs) but not all (not able to fly).

I was certainly a penguin in my group, operating as the international group treasurer for LeisureNet Ltd, the organisation I successfully blew the whistle on. Indeed, it was only via the trial transcripts that I understood that my all-male colleagues in my team had a nickname for me.  I was known as ‘Wendy the Wildcard’, the most likely person to respond to certain situations in an unpredictable way.

Diversity is important when it comes to innovation, ethics and compliance.

We all know the stress and anxiety that comes with feeling pressurised to assimilate to a group. Sometimes, extra pressure is put on new or peripheral group members by forcing them to prove their loyalty to the group; for example, when new gang members are expected to perform acts of aggression and when first year university students are bullied mercilessly.

At LeisureNet, our ‘baptism of fire’ meant capitulating to having tequila drunk from our belly buttons at the first party opportunity. And there were many parties.

The question at the beginning of this article – how your prototypicality in the organisation will influence whether or not you take on the extra work – now seems less than straightforward. On the one hand, prototypical group members  (Robins) seem most committed to their group, no matter what. On the other hand, the behaviour of peripheral group members (Penguins) is much more difficult to predict

Below is a copy of my transcript from the Cape High Court communicating how one of the CEOs had asked our executive team, one by one, where our loyalties lay. (Which of us would be the ‘Robins’ and which the ‘Penguins’) 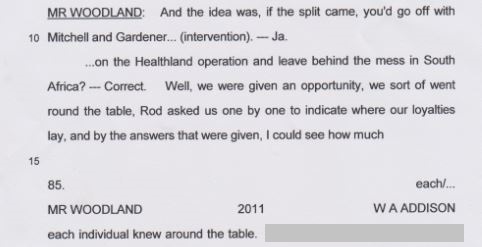 In this blog I want to look at how keeping up appearances (and being a Robin) may occasionally have an obvious strategic advantage but only when one is living on the edge (and being a penguin). Let’s have a look through the lenses of what I’ve called the Three S’s

– SELF, SITUATION and SYSTEM.although in this blog, I won’t be discussing the System (policies, processes)

SELF
How we categorise ourselves and other team members creates and maintains specific patterns of interaction that can weaken the capacity to Speak Up.

The principle driving the construction of our social identies rests on the two notions of accessibility and fit with gender and race being social categorisations that are often both chronically and situationally accessible. If the fit of the categorisation is poor, for example, as in me, a female, in my all-male group, similarities and differences do not correspond to an individual’s gender or race, and/or group members don’t behave in gender or race-stereotypical ways, individuals will cycle through other accessible categorisations (e.g., political orientation, religion, profession, sport) until an optimal level of fit is obtained. This process is not entirely automatic. People are motivated to make categorisations that favour the in-group fit and may go to some lengths to do this. This is especially true if an individual has a strong desire to be accepted. Such a person goes so far as to change their own thinking – this is because in-group prototypes are internal, self defining cognitive representations (they are “in here”) not external constraints (“out there”).

Individuals choosing this route will end up not always saying what they really think and behaving in ways that don’t reflect their underlying attitudes and values. The alternative is to become comfortable with all that goes with being a ‘Robin among Penguins’.

SITUATION
There is much made, particularly in Western societies, of individuality—how people are uniquely different from one another. However, if you observe a group of teens, or some friends at a restaurant, or a large crowd at a soccer match, you will also be struck at how similar people are to one another in dress and behaviour. Groups and situations seem somehow to submerge uniqueness in a sea of commonality, and the same person behaves differently as he or she moves from situation to situation and group to group. This speaks to our vulnerability to situational influences.

Because groups have a tendency to discuss shared rather than novel, unshared, information, majority (Robin) views become the norm. Groups and situations have their own behavioural attributes that regulate the behaviour of people in the situation or belonging to the group. This is why organisational and team narratives are influential.  Consider how these examples might craft and manage bonds and behaviours among team members: “We are the champions’’ ‘Our job sucks’. “We are the Gatekeepers” “We are integrity ambassadors” “Big Brother” “Business partners”  “The Smartest guys in the room”. “Eat your children before someone else does”  “Always win; never fail.”  These narratives construct and anchor representations of social categories and become situational mantras which influence what people actually talk about and act upon.

CONSIDERATIONS
Pick your dream team carefully. Loyalty and comfortable cohesion may result in overconfidence – smooth conversation does not always result in a good outcome. Keenness to maintain the friendliness of the group can result in self censorship;

Seek out people who think differently, who have had different experiences and who look different.(the Penguins) If empowered. these people can bring fresh and useful ideas to the table and even if they don’t, they’ll bring out the best in the team – if only making them feel awkward and forcing them to shape up.  A diversity of opinions, viewpoints, and identities, which is associated with more bumpy communication, often produces better group decisions.