Are Whistleblowers Saints Or Sinners? Are Felons Villains Or Victims?

Are Whistleblowers Saints Or Sinners? Are Felons Villains Or Victims?

The title of my blog is also a question to readers.  Before going any further write down your answer.

Question Two: Who do you believe feels the most emotional pain as a result of their actions and social labeling?   Using the graphic below insert Saint, Sinner, Villain or Victim under the emoji you think best represents your answer. We’ll return to your answers.

Brexit and Trump have both been experiential catalysts for the feelings of shock, fear and betrayal that the ‘losing-other’ group has experienced post voting and election. We desire a certain world, in which we know, or at least expect outcomes that suit our own biases. We attempt to suppress ambiguity so that a single interpretation is chosen, even if it is a frozen pattern.

I know how that feels. I experienced this emotional anguish when, believing it my regulatory and moral obligation to speak up against misconduct resulted in me losing my job, my career, my livelihood and potentially my life. Worse still, was the betrayal I experienced when forced to beg on the streets due to being blacklisted as a whistleblower. I felt as if the world had broken its promise, revealing that doing the right thing could cause devastation, chaos and cruelty. I felt utterly abandoned, utterly alone, cast out of the human and divine systems of care and protection that sustains life.

Although I didn’t, and have never framed myself as a victim, I was a victim. A victim of society’s collective inability and unwillingness to confront uncomfortable truths. And yet, and here’s the rub, I was treated as a villain instead.

Worse still I observed convicted felons, now pivoting on the speaking and education circuits who were more welcome, paid for speaking and were appearing to thrive where I was wilting.

So, folks just who are the Saints, who are the Sinners, and why is their treatment in contradiction to social narratives?

This blog is the result of many years of researching to understand this irrationality and my thanks go out to Professor Kurt Gray, author of the book The Mind Club  in helping me understand moral typecasting.  I write this blog open heartedly, without defensiveness and to illuminate our cognitive defaults and vulnerabilities in order that we learn to do better, through the empowerment of knowledge.

WHAT DO GANDHI and Mother Teresa have in common with Hitler and Ted Bundy? Very little, you might reply. But our perceptions of them are in certain ways surprisingly similar. Though we’re accustomed to classifying people as good or evil, saints or sinners, as we navigate the world, we categorise the people we encounter as either “moral agents” — those who take action, who are deserving of praise or blame — or “moral patients” — those who are on the receiving end of good or bad deeds.

On the flip side, positive moral actions, such as altruism, charity or pro sociability similarly entail a moral agent of a moral action to do good and a moral patient, this time a beneficiary, to reap the benefit of the moral action.

So we’ve got Moral Agents (Good or Bad) and Moral Patients (Victims or Beneficiaries). Let’s find out more.

Both Gandhi and Hitler, for all their profound differences, are moral agents, whom we see as capable of deliberate morally freighted action, powerful intention, self-control and planning.

One used his moral power to inspire millions of his countrymen and the other to kill them. But their agency is on some level first and foremost in our images of them.

Moral Agents (good or bad) seem tougher than others and better able to endure life’s tribulations. This mental schema means that the suffering of heroes is less salient and less demanding of empathy than that of others. When a normal person is punched our heart leaps, but when Superman or Batman gets punched we shrug it off because we expect them to do the same. It’s hard to picture Gandhi whimpering over a bruised knee.  If heroes seem tougher and relatively impervious than most then we may be more likely to cause them pain.  Our cruelty to those we admire speaks to our ability to easily forget the sacrifices of our heroes. We see this demonstrated in the way armed forces are treated on returning home after war.

It’s easier to respond to vulnerability than to strength

In one of Gray’s studies, called Harming the Saints, participants picked who they perceived as Moral Agents (good and bad), neutral agents, such as a teacher or bank teller and Moral Patients (Victims and Beneficiaries).  The Moral Agents (good and bad) were perceived to be less engaged emotionally and therefore insensitive to pain. The Moral Patients (victims and beneficiaries) were seen through the lens of empathy, perceived as powerless, more sensitive and not accountable for their own behaviour. 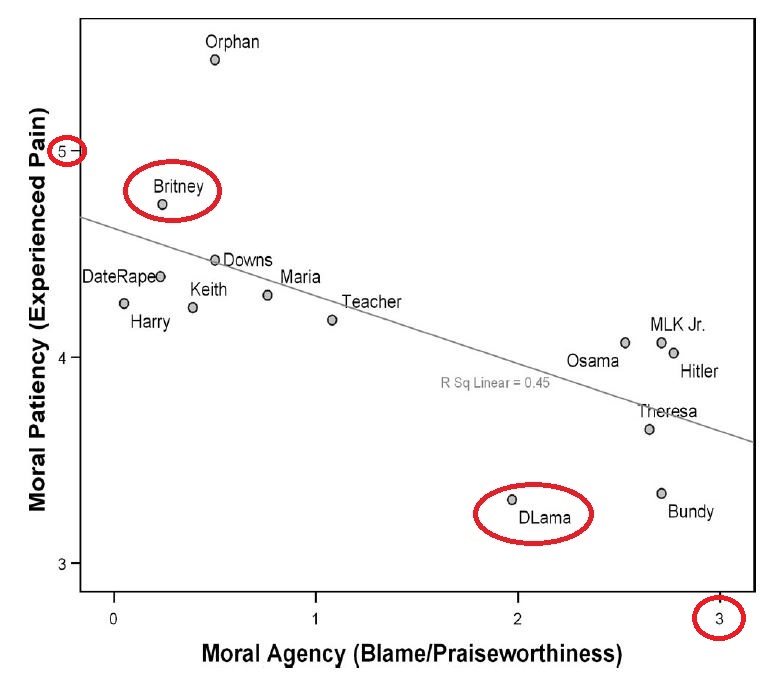 And the irrational thinking and behaviour here is just because people think certain individuals can take the pain and are less sensitive they are open to be harmed.

Perhaps the saying “No good deed goes unpunished” has legitimacy

Moral patients,especially victims, seem incapable of being blameworthy. As an example, let’s turn to celebrities: Ms Celebrity is pulled over for swerving all over the road in a car worth more than your house. After attempting to hide the bag of drugs under the passenger seat, Ms Celebrity stumbles out of her car and explains to police that the drugs are not her fault but instead that of a conveniently absent person. The following act is the victim act – the spokesperson for Ms Celebrity provides a statement ‘Ms Celebrity has long been a victim of drug use, alcoholism and depression arising from difficult childhood circumstances. She apologies unreservedly and has agreed to attend drug rehabilitation’. This strategy DOES work, we see it played out in courtrooms a lot of the time. Those perceived as victims do escape blame better than someone who emphasises their virtues.

A Neutral Agent
An individual who does nothing and largely remains a bystander.

Moral Typecasting – How we Perceive and Categorise individuals

Look at the picture below.  What do you see? A rabbit? A duck? 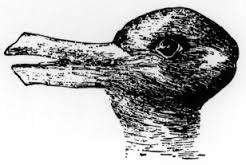 This speaks to the deep and faulty line in mind perception. Like a border between two very different countries, this fault line separates our perception of Moral Agents and Moral Patients and has profound implications for ethical debates and how we frame and respond to individuals.

Science shows that moral agents (good or bad) such as whistleblowers, are often judged on their disposition, their character, their personality, whilst Moral Patients (victims) are seen through the lens of a situation and are therefore given more empathy, often leading to excusing a behaviour.  Hence whistleblowers experience a ‘shoot the messenger’ response despite speaking out against a practice and or a situation, By zooming in on one person, we lose the big picture, and it leads us to a lot of unhelpful and unfair decisions.

Our Mind fault lines lead us morally astray.   For example, when a Moral agent of a negative action (Villain) is punished and jailed this Moral Agent, the Villain, transmutes into becoming a Moral Patient, a Victim.  That’s because people can imagine the pain of being punished and jailed, identifying with a victim before a hero. We need to be mindful of who we perceive as a victim because once we become empathic for a victim, even one who was a negative Moral Agent (villain) previously, we are much more prone to excuse our own immoral behaviour and to be aggressive towards others. We can also begin to fetishise criminals,even psychopaths like Ted Bundy.

Consider the employee who is corrupt and has the whistle blown on him, resulting in the employee being jailed. He goes from being perceived as a Moral Agent of negative action into being re-framed as a moral patient, a victim of a situation or circumstance, once he’s gone to prison. Because of being perceived as a victim people default into seeking to identify an aggressor, which they find irrationally in the whistleblower, who in turn becomes the recipient of hatred and aggressiveness.

Even with this hatred, the Whistleblower as a moral agent is hardly ever perceived as a victim. Whistleblowers are perceived to have clear agency – they are the ones choosing to the blow the whistle, therefore they are perceived as super agents, less sensitive to pain and therefore expected to endure the pain and cruelty that often follows. It’s much harder and more unique to imagine the unjust social stigma of standing out, being in an out-group, with all its negative outcomes, and therefore harder to empathise with.

Considerations
Have your perceptions and therefore answers to my two questions at the beginning of this blog changed?

People generally assume that others are like them unless they have good reason to think otherwise. This is a cognitive shortcut. Become conscious of the minds of others even if you perceive them to hold no instrumental value.

Feeling other people’s pain, feeling their suffering can lead to biased decisions, to irrational, short sighted actions and tone. Practice more cognitive empathy where you seek to understand where people come from, what they’re thinking, what their intentions are, what makes them happy. Become curious, learn how to engage in Courageous conversations

Practice socio centrism not ego centrism. Be less focused on your own imagined experiences in order to understand others.

Remember that perceptions of the capacity to endure harm is ever present in moral judgments. Superficial differences grow to become extremely meaningful and can result in cruelty.

Being cast as a moral patient(victim) can help us escape blame and compel others to protect us but it can also weaken us.

Whistleblowers are not invincible heroes but people most often fulfilling their moral duty and doing the best they can with a messy situation where they have divided loyalties. Although appearing to have Moral Agency, Whistleblowers feel the anguish and pain of cruelty, exclusion and aggressiveness in the same way that we perceive Victims do.